Scottish Championship car racers headed back to Knockhill for a vitally important round of the 2014 Championship, with leading competitors keen to cement their title challenges with strong results this weekend (Sunday 17th August). There were a number of racers also hoping to maintain their impressive 100% winning records for the season; and all bar one managed to do just that. 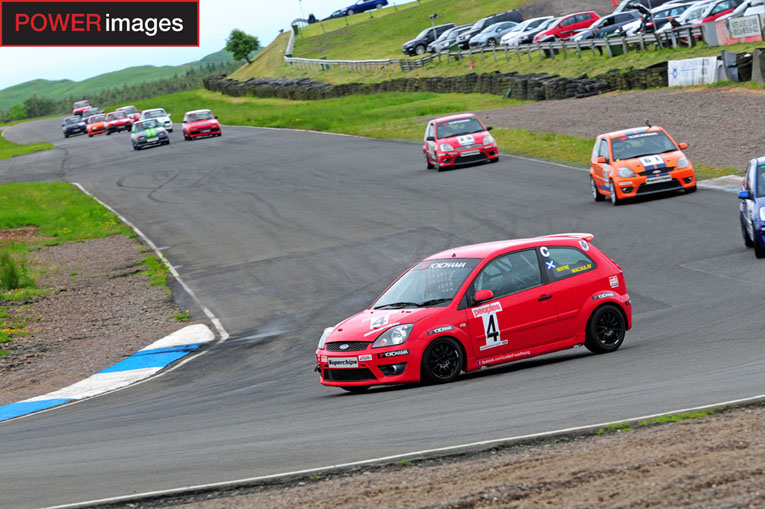 Raymond Boyd and Wayne Macaulay maintained their 100% winning streaks in the Classic Sports & Saloons Championship and The People’s Fiesta ST Championship respectively. The duo, now have two events left this year to become SMRC ‘invincibles’ for the 2014 season; however, Andrew Morrison suffered his first defeat of the season in the opening encounter of the weekend. Morrison though, did manage to win the next round (Class B1) and still maintains his top spot in the standings, in the overall Classic Sports and Saloons Championship. 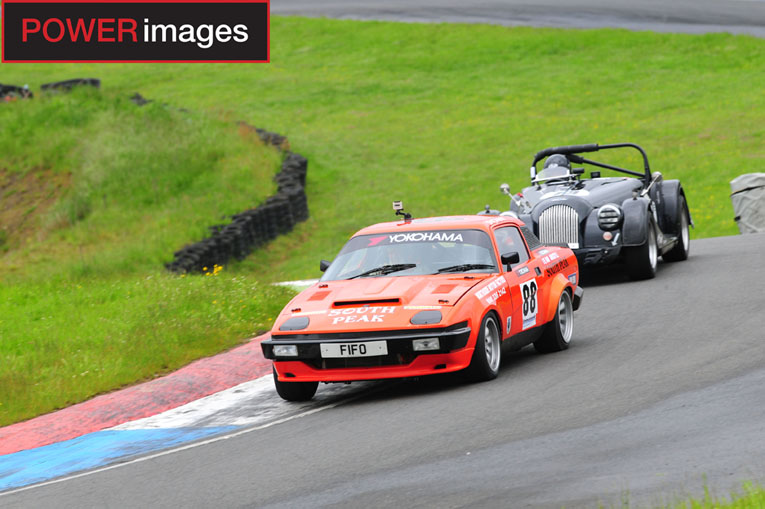 As mentioned previously, Wayne Macaulay claimed his 10th win of the season to keep his Championship charge on track in the People’s Ford Fiesta ST Championship. Macaulay though, had to work hard for his win, particularly in the final race, with Peter Cruickshank pushing him all the way to the finishing line. Cruickshank accompanied his 2nd place finish in the final outing with an opening 3rd place podium in the first race, just behind Forfar’s Kevin Whyte. The final podium of the weekend went to the returning Blair Murdoch (3rd). In the XR2 series, Steven Gray grabbed a brace of victories ahead of Hamish Smart and Jim Deans, with the order being the same on both occasions.

Florida based Sportscar Racer, Ryan Dalziel, made the long trip back home to Scotland, to catch a glimpse of his young Racing for Scotland charge, Ciaran Haggerty. Dalziel would have been delighted with what he saw from the 17 year old Formula Ford star, as Haggerty blazed his way to a qualification pole and two race wins today. Haggerty now takes the lead in the Scottish Formula Ford 1600 Championship standings, ahead of Jordan Grownkowski; who could only manage 3rd and 2nd placed finishes this weekend. Another youngster, Adam MacKay finally fulfilled some early season-promise with an intelligent drive in the opening race to take his first 2nd placed podium of the year. The Glasgow racer, then gave Gronkowski a torrid ride in the 2nd outing before eventually crossing the line in 6th place after a spin at Clark’s. That left the way clear for Clay Mitchell to claim his first ever SMRC podium.

In our pre-event blog, we somehow managed to mix up Legend racer Paul O’Brien with David Newall, and following O’Brien’s performance this weekend, we’re not likely to make that mistake again. The Naas racer bagged himself a fistful of points and the Legends Championship lead following his two race wins and 3rd place podium finish at Knockhill today. That said, John Paterson (1 podium) and David Hunter (2 podiums) will be happy enough to still be in touch at the top of the points table, heading to the penultimate event of the year on Sunday 14th September. Knockhill commentator, Duncan Vincent took the opening race win of the day and Daniel McKay secured the remaining 3rd place rostrum finish. The Legends races, also saw an outing by British GT Aston Martin driver Rory Butcher; and despite starting each race at the back of the grid; he’ll be happy with his first-ever Legends racing experience ending the day with a top 6 finish – passing 15 cars in the process. 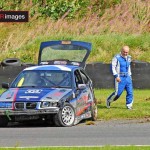 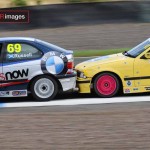 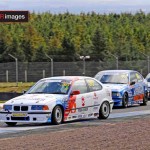 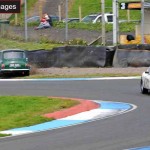 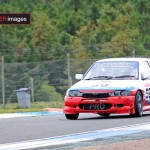 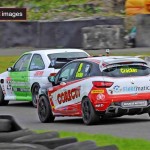 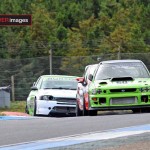 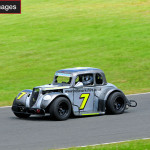 In the Scottish BMW Compact Cup, Wallyford’s Steven Dailly claimed two race wins ahead of Championship leader, Alan Kirkcaldy. Kirkcaldy though, seems content to let Dailly win for the rest of the season, as long as he finishes in 2nd place in each of the remaining four races. If that scenario pans out, Kirkcaldy will retain his BMW Compact Cup title by a solitary point; however, a single DNF or dropped position for either racer could drastically alter the approach of both drivers. Brogan Kinsella maintained his progress in the series by claiming two 3rd placed finishes behind the aforementioned duo.

Cameron Purdie secured two Scottish Saloons and Sports Car Championship wins on-the-road, piping Fiona Kindness and Andrew Morrison to the flag on each occasion. Robert Drummond would have to settle for a double 3rd-place podium behind the wheel of his Escort Cosworth. Despite Morrison’s opening B1 Class loss to Mark Dawson, he should still be well on course for an overall Scottish Saloons and Sports Car Championship tilt, when the action resumes in September. 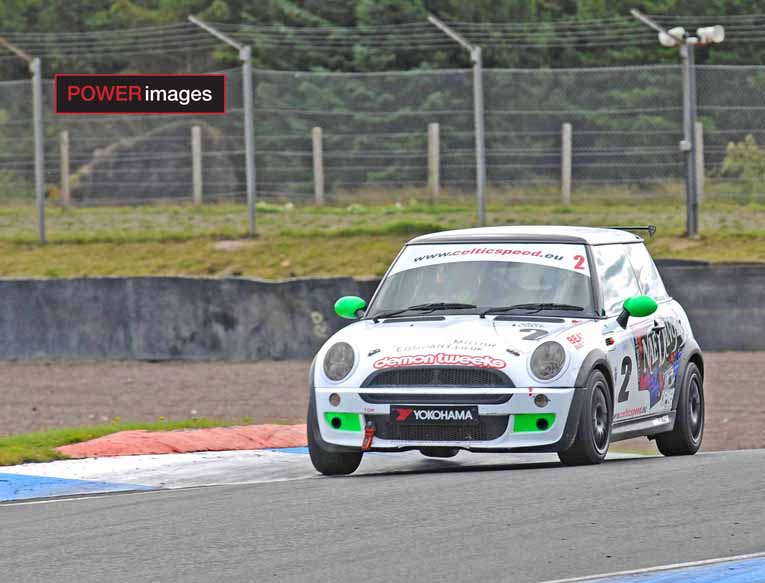 In the Celtic Speed Mini Cooper Cup, the status quo was maintained at the top of the standings as Kenny Thirlwall and Joe Tanner shared the winning spoils. Thirlwall, like Kirkcaldy, was happy enough to let Tanner take the opening two race wins, not willing to risk two second place points hauls by clashing with Tanner on track. Although the duo did have a two-lap battle once they had opened a gap on the rest of the field in the second outing; with Tanner making a unfamiliar passing move at Clark’s corner to seal the win. Thirlwall then claimed the final race of the day, in his favoured wet conditions with Tanner finishing down the order in 5th.  David Sleigh claimed pole position for the opening race of the day and turned that strong qualification performance into two 3rd placed podiums in the opening two races. The final (reverse) grid race saw Kyle Reid and Oly Mortimer takes their only podium finishes of the weekend.

“It’s been another typical SMRC raceday today. Plenty of action for the fans and some enthralling battles on track; it’s getting down to the business end of the season and we saw that with some of the performances this weekend.

“Hopefully, all those who attended Knockhill for the first time today enjoyed the action and as always; l’d like to thank everyone for their efforts this weekend,” commented Knockhill Events Director, Stuart Gray.

The next action for us; is the Dunlop MSA British Touring Car Championship next weekend (23/24 August). With 31 cars on the grid and some exhilarating action in store… make sure you book your tickets for our BIGGEST car racing event of the year.

You can catch up on all the results from today’s event via the Smart Timing and MyLaps websites.

Look forward to seeing you the penultimate round in September!